Come Out 2 Play: Designing Virtual Worlds— From Screens to Theme Parks and Beyond | World Building Institute 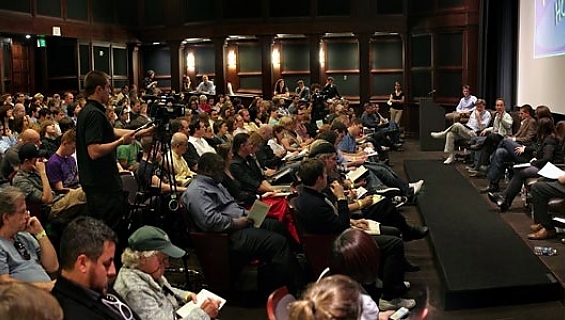 Hollywood has come a long way since Walt Disney invited families in 1955 to come out and play in the first cross-platform, totally merchandised sandbox—Disneyland.

Cut to today and most entertainment corporations are still focused on creating intellectual properties to exploit across all divisions of the Company.

However, as the studios and networks move away from the concrete spaces of movie and TV screens and start to embrace the seemingly limitless “virtual spaces” of the Web as well as the real-world spaces of theme parks, museums, and comic book conventions, the demands on creative personnel and their studio counterparts have expanded exponentially.

Rather than rely on old-fashioned merchandising and licensing departments to oversee vendors, which too often results in uninspired computer games, novelizations, and label T-shirts, several studios have brought these activities in-house, creating divisions like Disney Imagineering and Disney Interactive to oversee the design and implementation of these vast, virtual worlds.

In other instances, studios are turning to a new generation of independent producers—aka “transmedia producers”—charged with creating vast, interlocking brand extensions that make use of a never-ending cycle of technological future shock and Web 2.0 capabilities.

The results of these partnerships have been a number of extraordinarily inventive, interactive, and immersive experiences that create a “you are there” effect. These include the King Kong 360 3D theme park ride, which incorporates the sight, smell, and thunderous footsteps of the iconic gorilla as he appears to toss the audience’s tram car into a pit. Universal Studios and Warner Bros. have joined forces to create the Wizarding World of Harry Potter, a new $200 million-plus attraction at the Islands of Adventure in Florida.

Today’s panel focuses on the unique challenges associated with turning traditional media franchises into 3D interactive worlds, inviting you to come out 2 play in the studios’ virtual sandboxes.