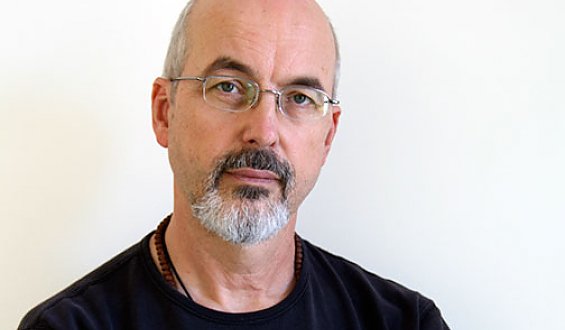 Bill Viola is considered a pioneer in the medium of video art and is internationally recognized as one of today’s leading artists. He has
been instrumental in the establishment of video as a vital form of contemporary art, and in so doing has helped to greatly expand
its scope in terms of technology, content, and historical reach.

For over 40 years Bill Viola has created architectural video installations, video films, sound environments, electronic music performances, flat panel video pieces, and works for television broadcast, as well as music concerts, opera, and sacred spaces. His works are shown in museums and galleries worldwide and are found in many distinguished collections. His single channel videotapes have been widely distributed on DVD, while his writings have been extensively published and translated for international readers.

Bill Viola received his BA in Experimental Studios from Syracuse University in 1973. From 1980 Viola and his wife Kira Perov lived in Japan for a year and a half where they studied Zen Buddhism with Master Daien Tanaka, and Viola became the first artist-in-residence at Sony Corporation’s Atsugi research laboratories.  In 1995 Viola represented the U.S. in the 46th Venice Biennale. In 1997 the Whitney Museum of American Art organized “Bill Viola: A 25-Year Survey” which traveled to five museums internationally and in 2003 “Bill Viola: The Passions,” was exhibited at the J. Paul Getty Museum, Los Angeles and traveled to institutions in London, Canberra, and Madrid. In 2004, Viola produced a four hour long video for a new production of “Tristan und Isolde” directed by Peter Sellars and conducted by Esa-Pekka Salonen. “Bill Viola: Hatsu-Yume (First Dream)” (2006-2007), drew over 340,000 visitors to the Mori Art Museum in Tokyo. In 2007 Ocean Without a Shore was created for the 15th century Church of San Gallo during the Venice Biennale. In 2008 “Bill Viola: Visioni interiori,” a survey exhibition organized by Kira Perov, was presented in Rome at the Palazzo delle Esposizioni. In 2012, the Museum of Contemporary Art in North Miami opened “Bill Viola: Liber Insularum” in conjunction with Art Basel Miami Beach.

Viola holds honorary doctorates from Syracuse University (1995), The School of the Art Institute of Chicago (1997), California Institute of the Arts (2000), and Royal College of Art, London (2004) among others. He is the recipient of numerous awards and honors including a John D. and Catherine T. MacArthur Foundation Fellowship in 1989. He was inducted into the American Academy of Arts and Sciences in 2000 and in 2006 he was awarded Commander of the Order of Arts and Letters by the French Government. In 2009 he received the XXI Catalonia International Prize in Barcelona, Spain. Most recently he received the 2011 Praemium Imperiale prize for Painting from the Japan Art Association.
Bill Viola lives and works in Long Beach, California with his long-time collaborator, Kira Perov.