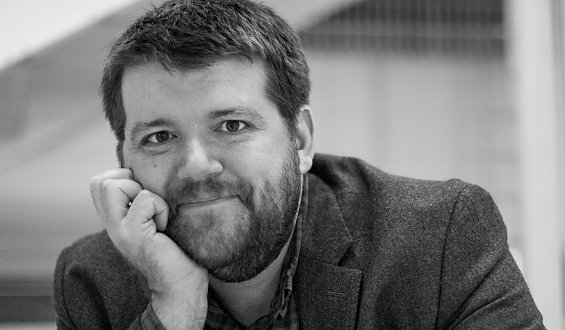 Geoffrey Long is a storyteller, scholar, and designer exploring the future of storytelling and how storyworlds and technology co-evolve. Having been the Creative Director and a Research Fellow for the Annenberg Innovation Lab at the University of Southern California (where his projects included exploring storytelling with such new screens as virtual reality, augmented reality, wearables and the Internet of Things, and how new creators and makers are flourishing using a mix of these new screens, new business models and emerging platforms), the Lead Narrative Producer for Microsoft Studios (where his projects included the Xbox One, SmartGlass, HoloLens, Quantum Break, Adera, Ryse and Halo), in a think tank under Microsoft's Chief Experience Officer and Chief Software Architect, a researcher and Communications Director for the Singapore-MIT GAMBIT Game Lab at the Massachusetts Institute of Technology, a magazine editor and a film producer, Geoffrey now serves as the Creative Director for the World Building Institute and the World Building Media Lab in USC's School of Cinematic Arts. In his various lives, he has consulted for such clients as BET, FOX, HBO, MTV, Warner Bros., Turner Broadcasting, Havas, GSD&M, Cisco, DirecTV, IBM, the Los Angeles Times, the City of Los Angeles, and Walt Disney Imagineering.

Geoffrey's writing has appeared in the extended edition of Spreadable Media by Henry Jenkins, Joshua Green and Sam Ford; The Rise of Transtexts: Challenges and Opportunities from Routledge, co-edited by Benjamin W.L. Derhy Kurtz and Melanie Bourdaa; Revisiting Imaginary Worlds: A Subcreation Studies Anthology from Routledge, edited by Mark J.P. Wolf; The Comics Journal's Guttergeek; and The Journal of Transformative Works and Cultures, and he serves as co-editor of the Playful Thinking book series from MIT Press with William Uricchio and Jesper Juul. His white paper "How to Ride a Lion: A Call for a Higher Transmedia Criticism" was published in 2011, and his Master's thesis, "Transmedia Storytelling: Business, Aesthetics and Production at the Jim Henson Company," was released in 2007. Geoffrey has served on the editorial boards of Eludamos and The Journal for Transformative Works and Cultures, and he frequently speaks at such conferences as SXSW, CES, the Game Developers Conference, the LA Film Festival, Storyworld, Transmedia Hollywood, Futures of Entertainment, SIGGRAPH, SCMS, and FuturePlay. In 2016, his worldbuilding work was included in an exhibition at the Venice Biennale.

Geoffrey holds a bachelor's degree in English and philosophy from Kenyon College and a master's degree in Comparative Media Studies from MIT. He is currently a doctoral student in the Media Arts & Practice program at USC's School of Cinematic Arts.