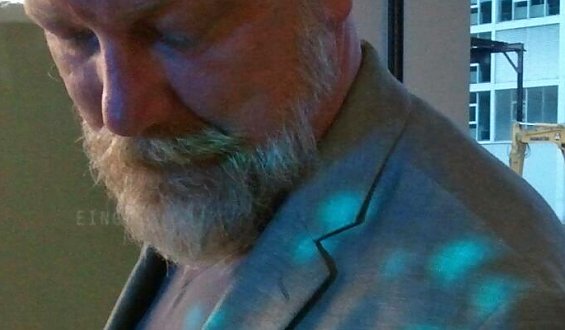 Mark Shepard is an artist, architect and researcher whose post-disciplinary practice addresses new social spaces and signifying structures of contemporary network cultures. His current research investigates the implications of mobile and pervasive media, communication and information technologies for architecture and urbanism.

In 2006 he organized Architecture and Situated Technologies (with Omar Khan and Trebor Scholz), a 3-day symposium bringing together researchers and practitioners from art, architecture, technology and sociology to explore the emerging role of "situated" technologies in the design and inhabitation of the contemporary city. In the fall of 2009, he curated Toward the Sentient City, an exhibition that critically explored the evolving relationship between ubiquitous computing, architecture and urban space. Organized by the Architectural League of New York, this exhibition consisted of five newly commissioned projects by interdisciplinary teams distributed throughout New York City.

He recently edited a book based on the exhibition titled Sentient City: ubiquitous computing, architecture and the future of urban space, published by MIT Press and the Architectural League of New York. He is an editor of the Situated Technologies Pamphlet Series, published by the Architectural League of New York and co-author of “Urban Computing and its Discontents” with Adam Greenfield. Other publications include “Tactical Sound Garden [TSG] Toolkit”, in 306090 v.9 - Regarding Public Space, published by Princeton Architectural Press; “Situating the Device” and “working title: Industrian Pilz”, in Shark, a Journal of Poetics and Art Criticism, v.1 & 2; and "Extreme Informatics: Toward the De-saturated City" in Urban Informatics: The Practice and Promise of the Real-time City.

Mark received an MS in Advanced Architectural Design from Columbia University; an MFA in Combined Media from Hunter College, City University of New York; and a BArch from Cornell University. He is an Associate Professor at the University at Buffalo, State University of New York, where he holds a joint appointment in the departments of Architecture and Media Study, and coordinates the  media | architecture | computing MArch+MFA dual degree program. He was recently a visiting researcher with the Netlab at Studio-X, a studio for experimental design and research run by the Graduate School of Architecture, Planning and Preservation of Columbia University. He was recently a fellow at Eyebeam Art + Technology Center in New York.