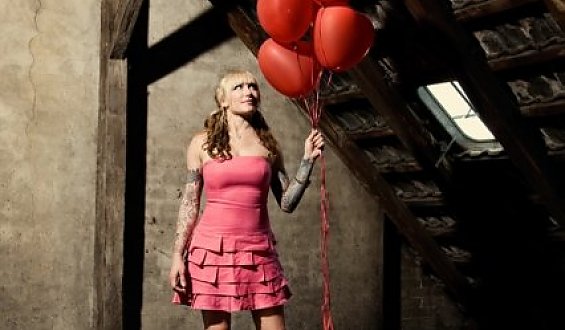 Tara McPherson is an artist based out of New York City. Creating art about people and their odd ways, her characters seem to exude an idealized innocence with a glimpse of hard earned wisdom in their eyes. Recalling myths and legends, issues from childhood and good old life experience, she creates images that are thought provoking and seductive. People and their relationships are a central theme throughout her work.

Tara exhibits her paintings and serigraphs in fine art galleries all over the world. Named the crown princess of poster art by ELLE Magazine, she has created numerous gig posters for rock bands such as Beck, Modest Mouse, and Melvins. Her array of art also includes creating toys with companies like Kidrobot, Dark Horse, and Toy2R, painted comics and covers for DC Vertigo, advertising and editorial illustrations for companies such as Wyden+Kennedy and Spin Magazine, and teaching a class at Parsons in NYC.

McPherson's art has been included in books such as Bunny In The Moon: The Art of Tara McPherson Vol III, Lost Constellations; The Art of Tara McPherson Vol II, Lonely Heart: The Art of Tara McPherson, Fables: 1001 Nights of Snowfall, The Art of Modern Rock, Illusive 2, Illustration Now!, SWAG and SWAG 2, and more. She has lectured at TedxBrooklyn, Semi-Permanent, Offset, Institute of Comtemporary Art London, OFFF, School of Visual Arts, University of Philippines, AIGA NYC, AIGA Austin, Columbus College of Art and Design, Parsons, The University of Arizona, MADE in Edmonton and Foyles London. Her art has been featured in the Oscar Award winning film Juno, on the cover of the Eisner Award winning anthology Popgun 3, and is in the permanent collection of The Rock and Roll Hall of Fame. In October 2012 she won Toy of the Year at the Designer Toy Awards for her 'Lilitu' figure produced by KidRobot.

Tara was born in San Francisco in 1976 and raised in Los Angeles. She received her BFA from Art Center in Pasadena, CA in August 2001 with honors in Illustration and a minor in Fine Art. She interned at Rough Draft Studios, working on Matt Groening's "Futurama" during college.