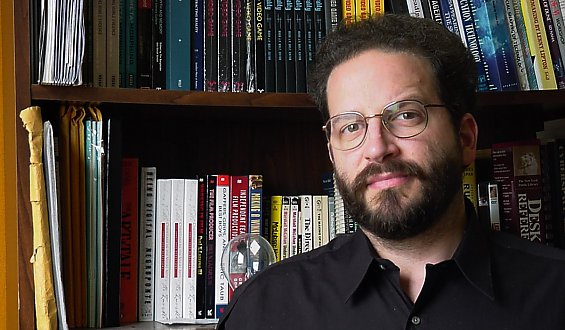 Mark J. P. Wolf is a Professor in the Communication Department at Concordia University Wisconsin.  He has a B. A. (1990) in Film Production and an M. A. (1992) and Ph. D. (1995) in Critical Studies from the School of Cinema/Television (now renamed the School of Cinematic Arts) at the University of Southern California.

His books include Abstracting Reality: Art, Communication, and Cognition in the Digital Age (2000), The Medium of the Video Game (2001), Virtual Morality: Morals, Ethics, and New Media (2003), The Video Game Theory Reader (2003), The Video Game Explosion: A History from PONG to PlayStation and Beyond (2007), The Video Game Theory Reader 2 (2008), Myst and Riven: The World of the D’ni (2011), Before the Crash: Early Video Game History (2012), the two-volume Encyclopedia of Video Games: The Culture, Technology, and Art of Gaming (2012), Building Imaginary Worlds: The Theory and History of Subcreation (2012), The Routledge Companion to Video Game Studies (2014), LEGO Studies: Examining the Building Blocks of a Transmedial Phenomenon (2014), Video Games Around the World (2015), the four-volume Video Games and Gaming Cultures (2016), Revisiting Imaginary Worlds: A Subcreation Studies Anthology (2017), Video Games FAQ (2017), The World of Mister Rogers’ Neighborhood (2017), The Routledge Companion to Imaginary Worlds (2017), The Routledge Companion to Media History and Obsolescence (2018), and two novels for which he is looking for a publisher. He is also founder and co-editor of the Landmark Video Game book series from University of Michigan Press, founder and editor of the Imaginary Worlds book series from Routledge, and founder of the Video Game Studies Scholarly Interest Group and the Transmedia Studies Special Interest Group within the Society of Cinema and Media Studies. He has been invited to speak in North America, South America, Europe, Asia, and Second Life, and has had work published in journals including Compar(a)ison, Convergence, Film Quarterly, Games and Culture, New Review of Film and Television Studies, Projections, and The Velvet Light Trap. He is on the advisory boards of Videotopia, the International Arcade Museum Library, and the International Journal of Gaming and Computer-Mediated Simulations; and is on several editorial boards including those of Games and Culture and The Journal of E-media Studies.

He lives in Wisconsin with his wife Diane and his sons Michael, Christian, and Francis.