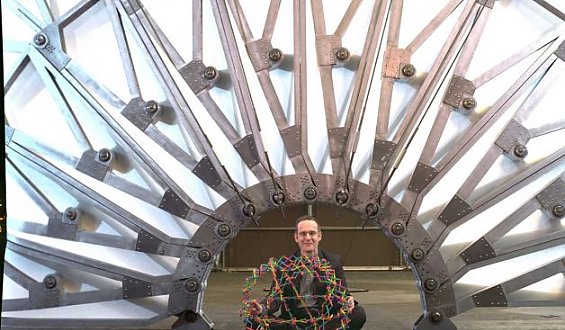 the work of inventor Chuck Hoberman, internationally known for his “transformable structures.” Through his products, patents, and structures, Hoberman demonstrates how objects can be foldable, retractable, or shape-shifting. Such capabilities lead to functional benefits: portability, instantaneous opening, and intelligent responsiveness to the built environment.

Hoberman is the founder of Hoberman Associates, a multidisciplinary practice with clients ranging across sectors including consumer products, deployable shelters, and space structures. Examples of his commissioned work include the transforming LED screen that served as the primary stage element for the U2 360° world tour and the Hoberman Arch in Salt Lake City, installed as the centerpiece for the Winter Olympic Games (2002). Other noteworthy commissions include a retractable dome for the World’s Fair in Hanover, Germany (2000); the Expanding Hypar (1997) at the California Museum of Science and Industry; the Expanding Sphere (1992) at the Liberty Science Center, Jersey City, New Jersey; and the Expanding Geodesic Dome (1997) at the Centre Georges Pompidou in Paris.

Hoberman’s work has been exhibited several times at the Museum of Modern Art in New York. In 2008 his commissioned installation Emergent Surface was part of the exhibit “Design and the Elastic Mind.”

Hoberman holds a bachelor’s degree in sculpture from Cooper Union and a master’s degree in mechanical engineering from Columbia University. He won the Chrysler Award for Innovation and Design in 1997.