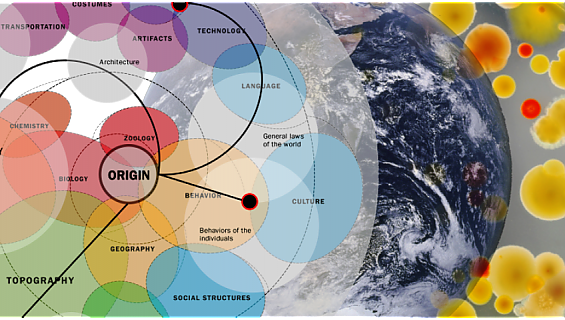 In conjunction with the Science of Fiction, USC | 5D Institute and KCRW present Sound of Fiction, a one night celebration of new sonic innovators. Curated by Vanja Alispahic.

Emerging from the endless summers of Venice, CA to teaming up with Shlohmo, Jonwayne, D33J, RL Grime and more to form the Wedidit crew, Jasper Patterson aka Groundislava has transformed from bashful video gamer to full­fledged composer. Groundislava has roots that draw from 80s nostalgia, TV and pop culture that grow and transform into the 21st Century aesthetic of electronic music. Recently tapped for official remixes of Slugabed and Shlohmo as well as Kutmah’s Brownswood compilation, Groundislava returns with the ‘Feel Me’ LP, the follow­up full­length to his self­titled 2011 debut. A mature step for the artist, ‘Feel Me’ showcases Groundislava’s unique sensibilities for developing sweeping soundscapes, luscious backdrops and somber tracks in a distinct sound all his own.

Performance artist, choreographer, & designer who makes highly theatrical works exploring dance's aesthetic and socio­cultural possibilities. He has choreographed for contemporary pop artists such as Ke$ha, The Gossip, and a performance by Muse at the 2011 Grammys. Ryan's work has been presented in national art galleries, on fashion show runways, professional dance stages, numerous TV shows and at some of the grittiest night clubs around the world. He has been called "A force to be reckoned with" by Huffington Post and "a fucking genius" by Blackbook Magazine.

There are no easy labels to describe Ben Stokes. He works as a director, animator, composer, visual artist, producer, and most often a blend of all these things at once. He creates dazzling spectacles and employs an impressive array of talents to make it happen. Stokes directed groundbreaking music videos for an extensive list of artists including DJ Shadow, De La Soul, Nine Inch Nails, and Public Enemy. Always having one foot firmly planted in both music and film, his live performances and audiovisual installations have been blowing minds across the continents. He has created and VJ's all the live visuals for both the DJ Shadow 2002 & 2006 world tours, the Cut Chemist & DJ Shadow "Hard Sell" 2008 world tour and most recently, the Shadowsphere World Tour.

Scott Pagano creates music videos and concert visuals for some of the worlds leading musicians, developing captivating environments augmenting experiences around the globe. Recent projects for Skrillex, Zedd, Koan Sound, and The M Machine have brought a dynamic explosive visual sophistication to the forefront of a new generation leading the electronic dance music scene. Going beyond flashing lights and moving lines, Pagano works to bring a cinematic scale to screens and stages creating rich worlds blending photographic and synthetic sensibilities to create memorable experiences where sound and image converge. Strong interests in organic structure, mechanical systems, architectural forms, and procedural processes are at the core of his work. In addition to visual production for musicians, Pagano creates fine art and experiential video work that has been included in festivals and at venues including Ars Electronica, TED Global, Hipersonica, V2 Institute for the Unstable Media, Cimatics, Optronica, Siggraph Asia, Volta NY, Hypersounds, Visions & Voices, and the Rotterdam Film Festival.