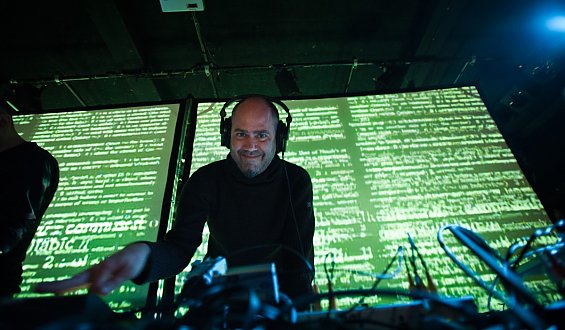 There are no easy labels to describe Ben Stokes' career. He works as a director, animator, composer, visual artist, producer, and most often a blend of all these things at once. He creates dazzling spectacles and employs an impressive array of talents to make it happen.

Ben was raised in Minneapolis by a musician mother and composer father. He studied animation and then went on to the School of the Art Institute of Chicago in 1985 for a BA in Film Video and Sound. While still in school, Stokes founded H-Gun Labs with fellow SAIC students Eric Zimmermann and Eric Koziol.

As both the co-founder and director of H-GUN Labs, Stokes directed ground breaking music videos for an extensive list of artists including De La Soul, Nine Inch Nails, Public Enemy, and The Orb. Stokes also did a large variety of commercials and broadcast design. This respected body of work has received many awards including two Gold BDAs, a Monitor Award, and Res Fest Viewers Choice. In 2006, Stokes was honored with a retrospective of his music video work at the Lincoln Center in New York.

Always having one foot firmly planted in both music and film, the next logical step was creating live performances and audiovisual installations. Stokes' own musical project, DHS, (Dimensional Holofonic Sound) has produced videos, audiovisual work, and albums including the 1989 EP 'House of God'. The title track became an international dance hit. It was re-released in 2009 by Poker Flat Recordings.

Recent works as a director includes Music Videos for DJ Shadow, The Mighty Underdogs, and Bay Area favorite Azeem. In addition to music videos, he creates and VJ's all the live visuals for both the DJ Shadow 2002 & 2006 world tours, the Cut Chemist & DJ Shadow "Hard Sell" 2008 world tour and most recently, the Shadowsphere World Tour which was performed across five continents. He is also a touring member of the band Meat Beat Manifesto in which he performs a live audio-visual set with founding member Jack Dangers.

Currently, Stokes is the owner of Mission Control, a creative laboratory and multimedia studio in San Francisco, where his ongoing experiments with new technology infuse all his work with groundbreaking effects. Between touring the world and being a mad scientist in the Mission Control lab, Stokes finds the time to also run a record label called Tino Corp with Jack Dangers of Meat Beat Manifesto. Never content to stay still for very long, Ben continues to forge ahead finding innovative new ways to blow minds.