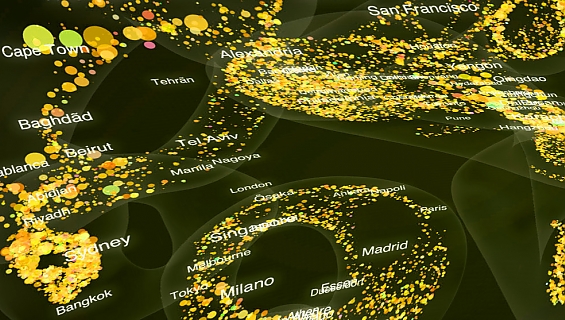 A two-evening transmedia design summit on September 20th and 21st, 2012, at USC School of Cinematic Arts, 7pm to 10pm, followed by a reception on both evenings.

As information is liberated from concrete and paper how does new data and content transform the material from which it came?

Does the multi-authored narrative of the city inform our view into the future of a new kind of storytelling experience?

Can the novelist’s command of world building be challenged and enriched by a new dimension that enables multi-authored pathways?

As the construct of the city and the concept of the book move towards each other in both scale and functionality, this 5D Flux summit investigates the potential of dynamic new histories.  When the city and the book become both virtual and interactive, and contain and fuel multiple scenarios which evolve and coexist within synthetic worlds, what new stories can we tell?

In association with USC School of Cinematic Arts, the 5D Institute invites you to join our diverse and interdisciplinary network of writers, architects, engineers and artists in a multi-panel provocative and disruptive discussion of the possibilities of dynamic environments in digital publishing, virtual architecture, and interactive media, and the role of world building in the future of storytelling.

In 1964, in London, Ron Herron, partner in the radical pop architecture group Archigram, designed a project called Walking City. Walking City imagines a future in which borders and boundaries are abandoned in favor of a nomadic lifestyle among groups of people worldwide. Inspired by NASA’s towering, mobile launch pads, hovercraft, and science fiction comics, Archigram envisioned parties of itinerant buildings that travel on land and sea. ... Walking City anticipated the fast-paced urban lifestyle of a technologically advanced society in which one need not be tied down to a permanent location. The structures are conceived to plug ... (global) information networks to support the needs and desires of people who work and play, travel and stay put, simultaneously. By means of this nomadic existence, different cultures and information is shared, creating a global information market... (Peter Blake, Architectural Forum, 1968).

In September 2012, at USC School of Cinematic Arts, the 5D Institute will gather its network around the possibility of building tangible narrative spaces, in the worlds of interactive publishing, media and architecture, where cross-media literature and virtual cities can indeed transcend borders and create new cultures and stories.

As information is liberated from concrete and paper how does new data and content trans- form the material from which it came? Is this only a perceptual shift or are we sliding into a new phase where information rapidly transforms materiality, and narrative can be experienced in multiple or simultaneous ways that were previously impossible? Where form changes not by function but by perception.

In this rich dialogue, the extremes of scale and identity between our understanding of a book and a city can provoke new questions. Does the multi-authored narrative of the city inform our view into the future of a new kind of storytelling experience? In worlds where the City is virtual and the Book interactive, what is the difference between the two? Can the depth and coherence of the novelist’s command of world building inform the architect to bring a powerful personal engagement into the intersections within the virtual city. In the future of the City and the Book, who will be the authors of these spaces?

Architects who contribute to the narrative of the city understand and accommodate the existence of multiple authors and an evolving, dynamic development of a city’s story. Writers who are open and interested in the promise and excitement of new kinds of publishing that might embrace the concept of multiple authors - including the reader - will talk about the design and engineering of a new genus of storytelling filled with variations of choice and disruption.